The International New Age Trade Show, or INATS, is a wonderland of metaphysical authors and books, crystals, jewelry, singing bowls, and other goodies for every type of practitioner.  It is the only trade show for retailers such as Illuminations.  But for us, “us” being Stephanie Ryan and Gretchen Little, it’s becoming more and more like a family reunion.  The people we meet are not just vendors or authors or publishers, but friends.  What a great business we are in!

We spent a lot of time with Margaret Ann Lembo.  She is going to be the keynote speaker at the Iowa City Metaphysical Expo in October 2019.  She will also be teaching three different workshops at Illuminations including Cord Cutting.  Margaret has her own store in Florida but is a prolific author and has created a line of essential oils and sprays.  She and her husband are a delight to hang out with. 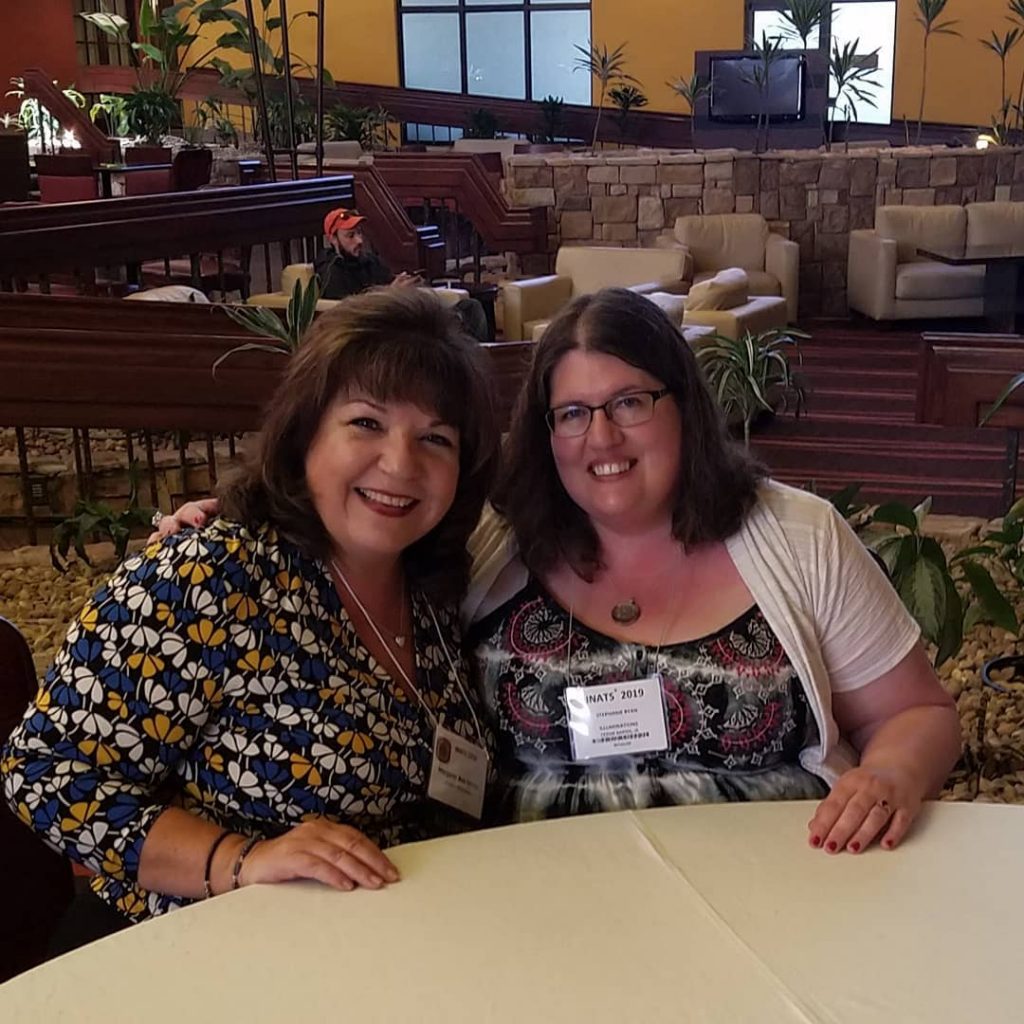 We’ve met Jason Mankey at Paganicon several times but this was his first time at INATS.  He is a writer of witchy things and also the editor of Patheos Pagan.  People flock to his presentations at Paganicon because he is very knowledgeable while being very entertaining.  Definitely a fan favorite.  Because his college roommate was from Cedar Rapids he actually has been in town before.  We will see if we can get him to come back. 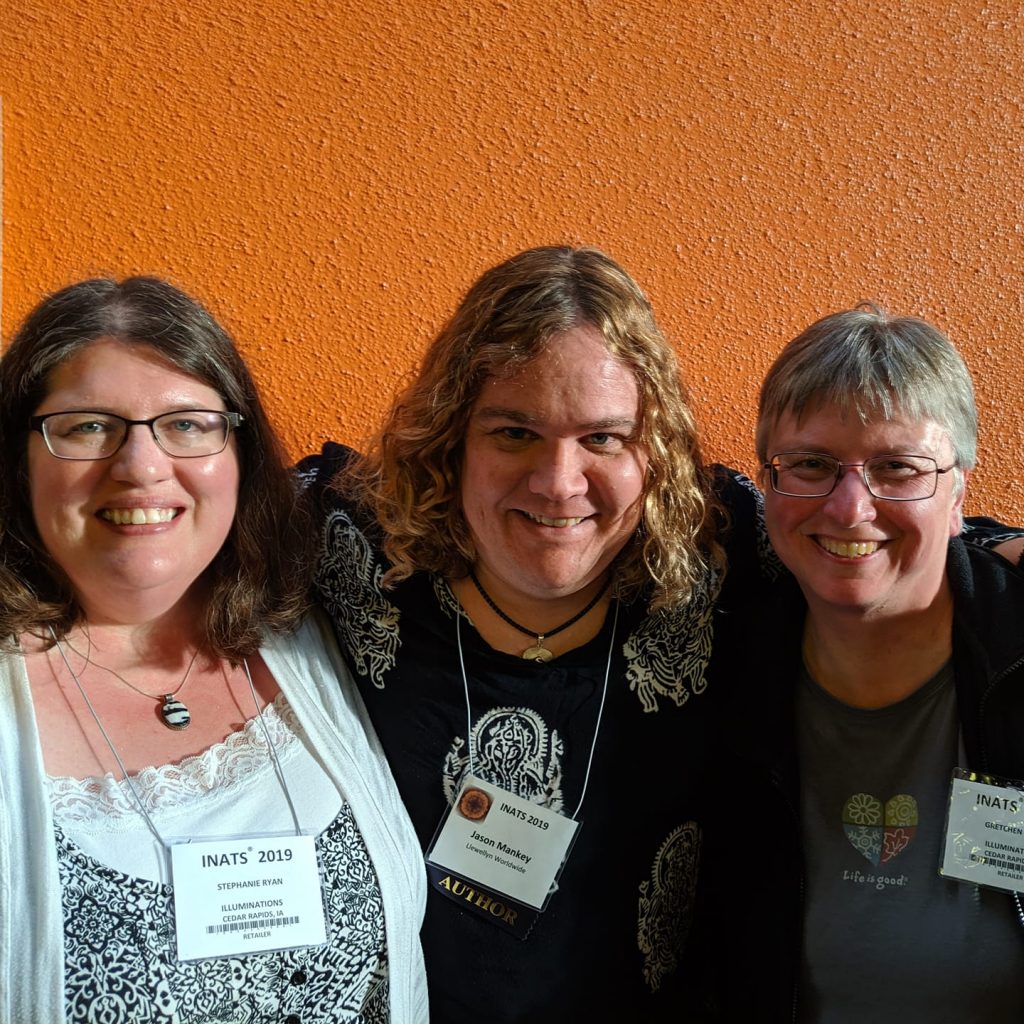 Last year we had the good fortune to be able to hear Alana Fairchild speak as the Keynote Speaker and then take a day long workshop with her at Goddess Isis Books and Gifts in Denver.  She is another very prolific author of books and oracle decks who hails from Australia.  We are looking goofy because last year we took another photo in the same way.  I (Gretchen) came up with this way of taking selfies because I never seemed to know where to look at a cell phone.  We were so happy that Alana was cool enough to play along and now it’s become a thing.  We didn’t even know that Alana was going to be attending INATS until the day we were driving to Denver so that was really a treat! 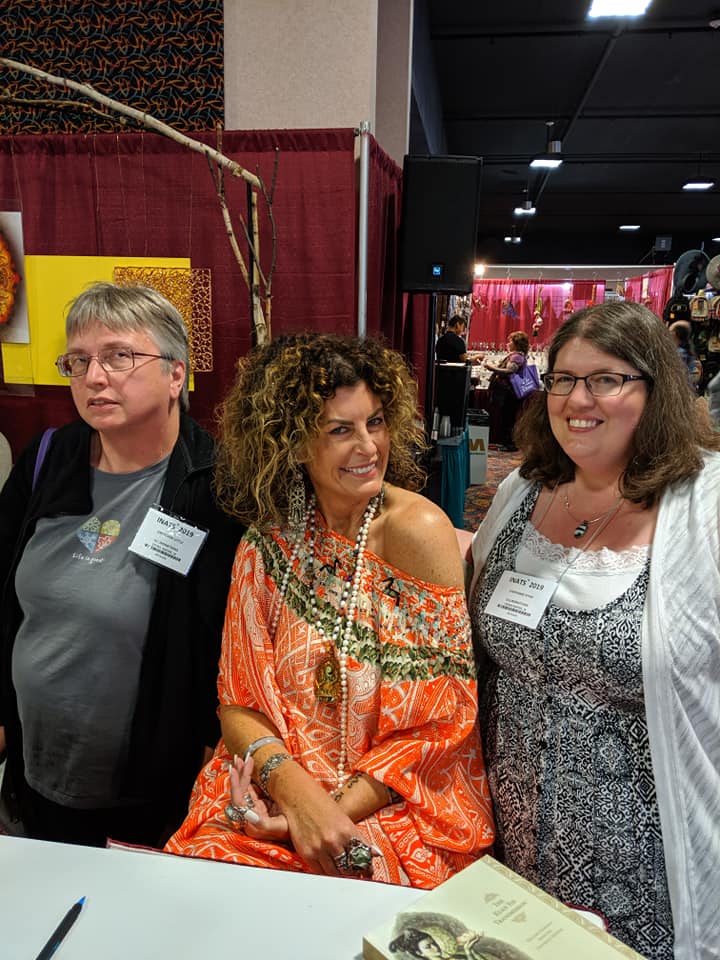 Kelly Sullivan Walden was the Keynote Speaker this year.  Kelly has written about dream work and the Hero’s Journey.  She is a dynamic speaker and has so much wisdom to share about unpacking the messages in your dreams and knowing where you are on your own Hero’s Journey that we just wanted to spend all day with her.  She did mini readings at the Llewellyn booth and we both took advantage of that. 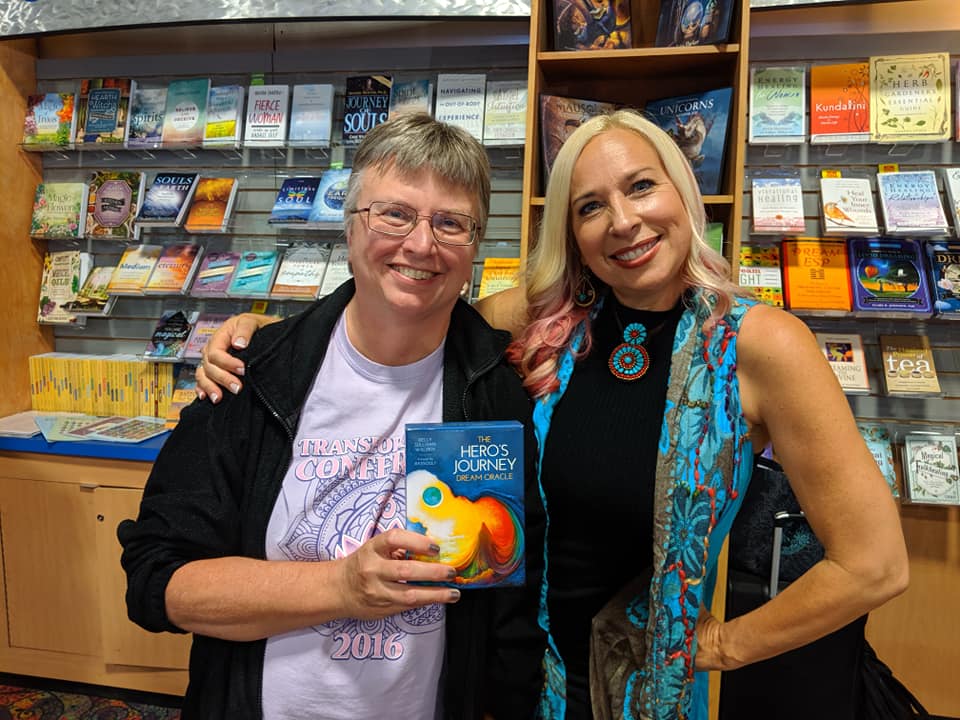 We heard Lee Harris speak at the Author’s Breakfast. Not only did he tell us about how he came to be a channeler but he also treated the audience to a channeling session.  He had many inspiring messages for us specifically as retailers.  Both of us (Stephanie and Gretchen) also have the ability to channel but it’s always a thrill to watch someone else do it. 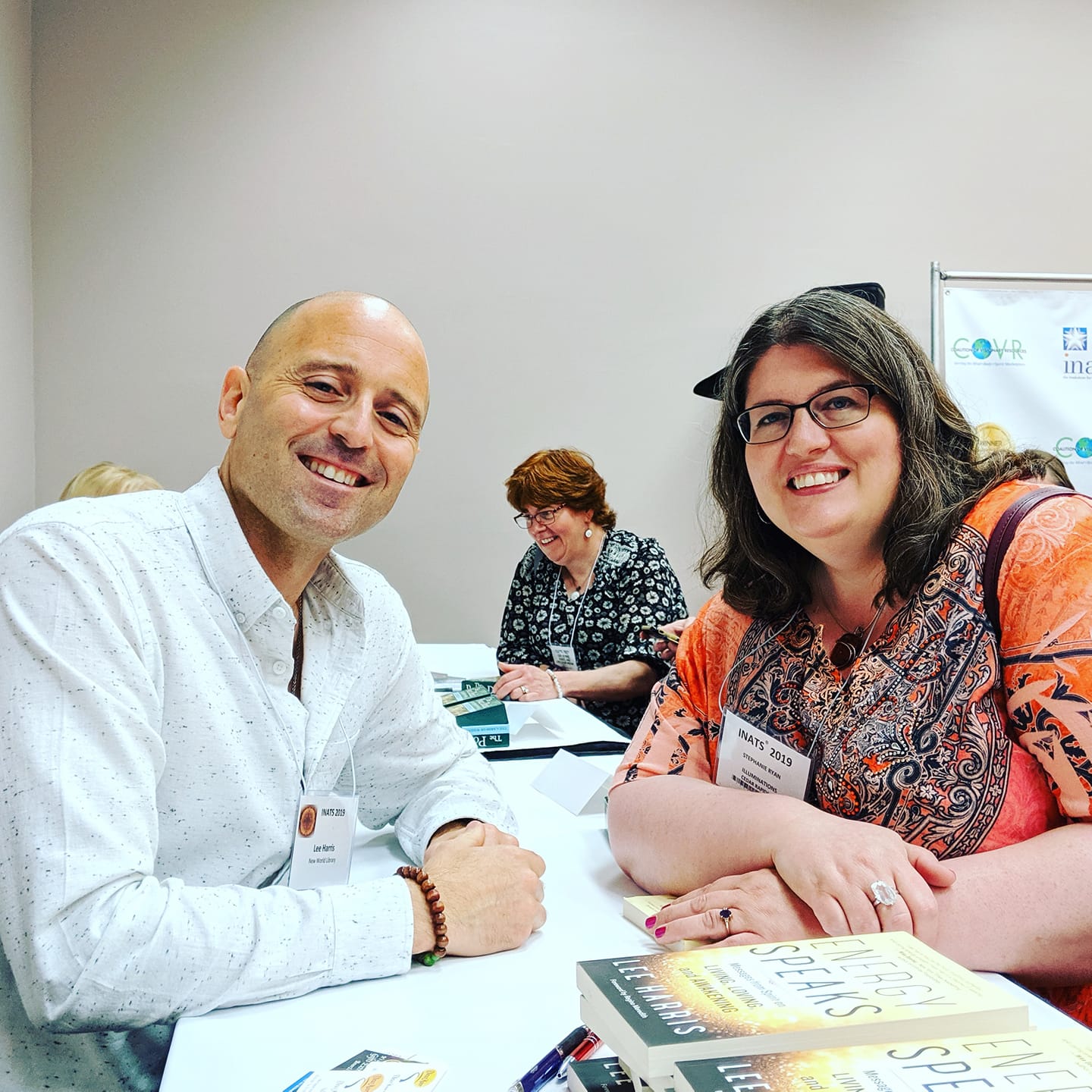 We almost didn’t go to INATS this year because there seemed to be too much that needed tending to here at home, but when I (Gretchen) saw that Lynn Andrews was going to be there I said we had to go.  Lynn wrote a series of books back in the 1980s that blurred the line between reality and fiction and the first one, Medicine Woman, really expanded my consciousness.  I mean, it blew my mind.  When I read that back in 1990 it was a pivotal moment in my life that led to me standing there talking to her almost thirty years later.  It’s easy to underestimate the power of books but this is one of those instances where one changed my life.  Many of us in line to get our Power Deck signed felt the same way. 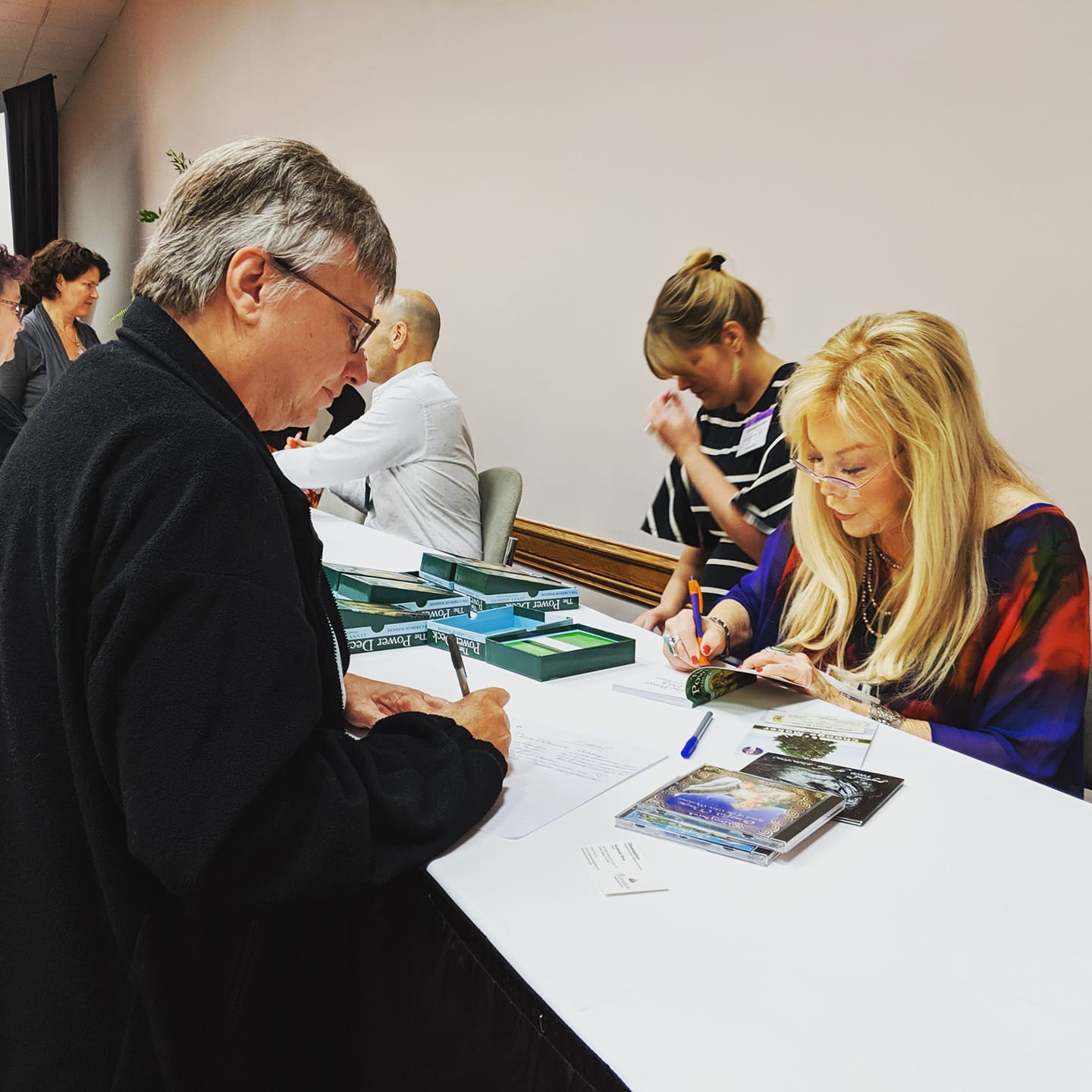 Angela Kaufman had just been at Illuminations the week before INATS to do readings and teach a workshop based on her Queen Up! book.  She was in Denver for an event at a local store.  We invited her to crash INATS and hang out with us, so she did!  We first met Angela at INATS last year and attended her workshop, and then ended up inviting her to Illuminations.  As we learned on this trip, you can plan things via e-mail and even phone calls, but there’s nothing like getting together in person to get the creative juices flowing.  We have some exciting workshops in the planning stages, hopefully for sometime in the spring of 2020.  Meanwhile she may stop by this fall, too.  (Thanks to Inner Traditions for the unicorn horn!) 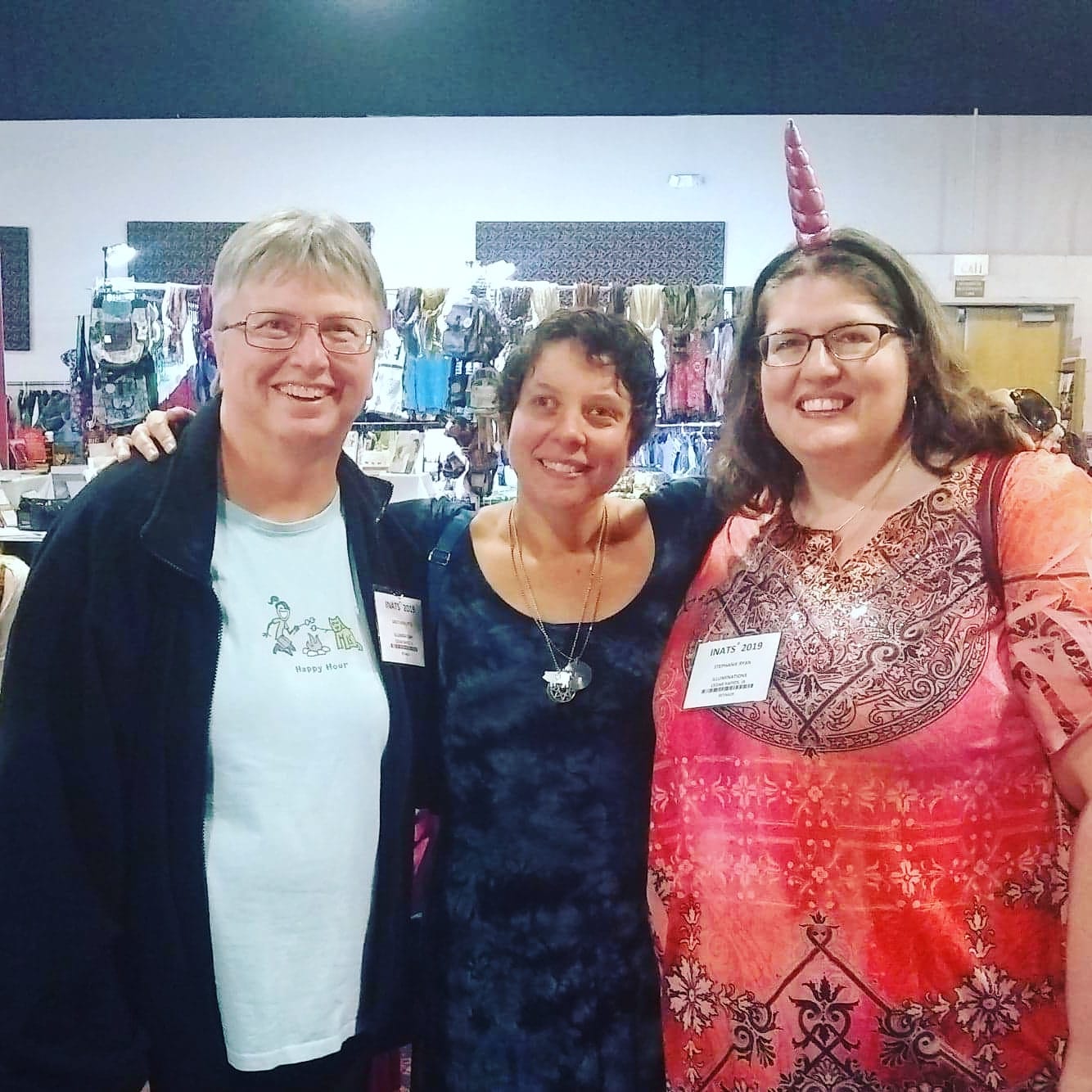 Meeting an Author Can Change Your Life!

We had so many in-depth conversations with lots of other authors and the good people who do the hard work of selling books and managing authors at the publisher’s booths.  Stephanie invited all the authors we met to Illuminations and almost all of them (including Lynn Andrews!) expressed interest in coming to Iowa.  This is very exciting!  The people who write the books really understand their craft/process/modality and also what it’s like to be a professional at it.  It’s priceless to have a chance to get to talk with them in person.  Shifts can happen just from being in their energy.  We want to bring them to Iowa so that you can have this experience without having to travel to New York or Sedona or California.

Last, but not least, we saw some of the other shop owners from home.  We were all super busy working our butts off shopping and networking, but we took a minute to take this photo. All of us are participating in the Eastern Iowa Summer Metaphysical Shop Hop this summer that was started last year by Andrea of Kae Apothecary.  That was a lot of fun in 2018 and we all worked very hard at INATS to bring home new goodies for you to find this summer.  Visit us all and see what we have for you! 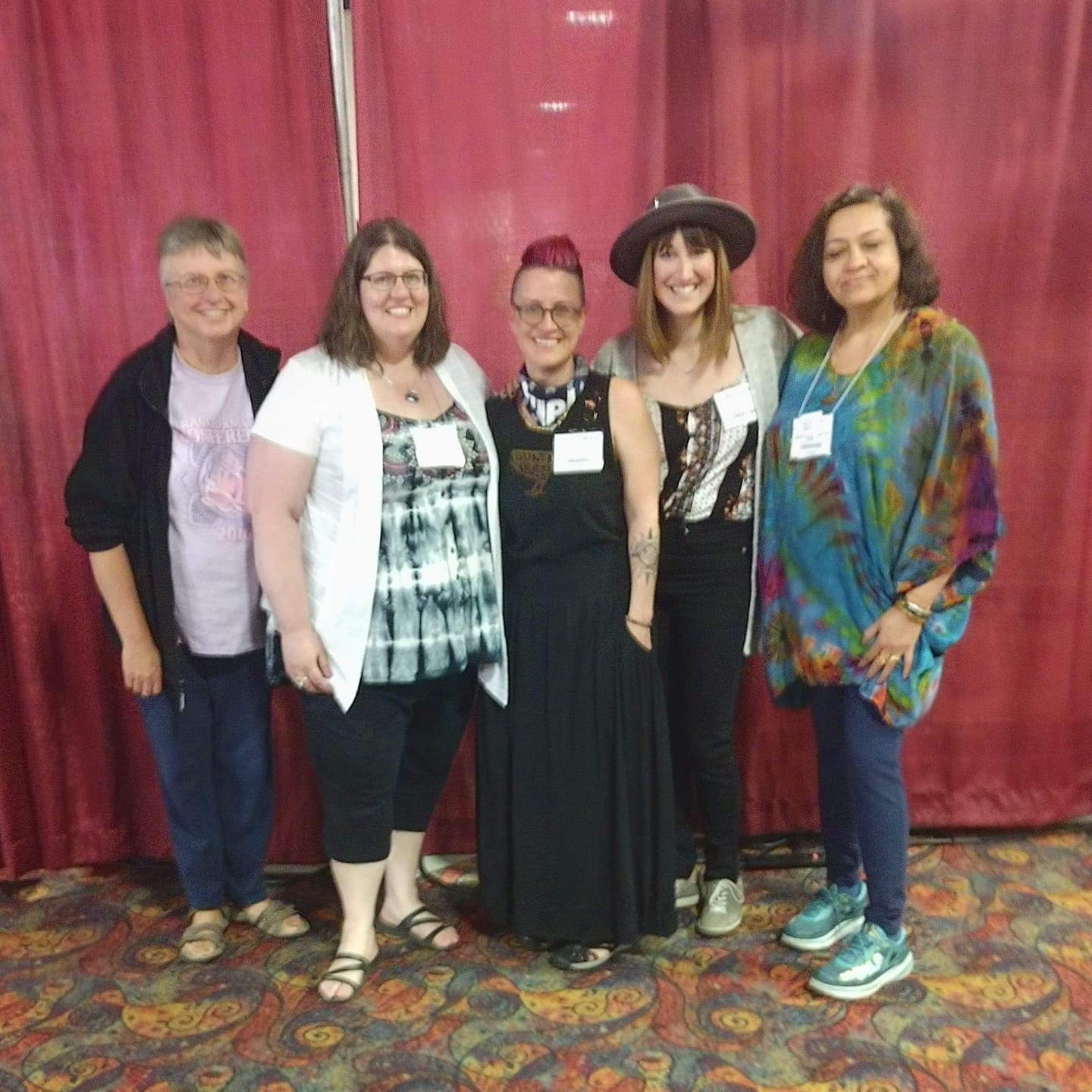